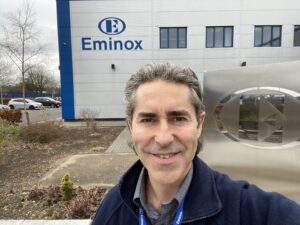 Across the world, the attention of the public, governments and industry is focused on reducing emissions, cutting the release of greenhouse gases and improving air quality. While rail is seen as the most sustainable mode of surface transport, it is certainly not exempt from the global imperative to reduce emissions, especially given the large number of diesel trains in use today.

Even if electrification and alternative technologies such as hydrogen and battery traction are rolled out as rapidly as resources permit, the reality is that diesel trains are set to remain in front-line service for several decades.

There is much that can be done to ‘clean up’ diesel traction. Modern trains have low-emission engines and exhaust cleaning technology, while a recent pilot project confirmed the practicality of retrofitting exhaust treatment to older diesel multiple-units.

The UK lags behind most European countries, with around 40% of route-km electrified; at present, 64% of all energy used to power its trains comes from diesel. Although Network Rail recommended a widespread expansion of electrification in its interim Traction Decarbonisation Network Statement, no decision has yet been taken by the UK government on whether to start a proposed 30-year rolling programme.

Meanwhile, figures from the Office of Rail & Road show that emissions from diesel freight trains rose by 8·6% year-on-year in 2019-20. And there is clear evidence that diesel exhaust emissions have an impact on health, particularly in urban areas. Research led by King’s College London found that concentrations of air pollutants, including particulate matter, were 30% to 40% higher at Edinburgh Waverley station compared to the surrounding area. Other major stations are similar.

Replacing mid-life diesel trains is neither cost-effective nor practical. It is simply not economic to scrap trains that still meet operator and passenger requirements in every other aspect. What is needed is a new approach that can learn from the technology used in other industries.

Eminox has been designing, manufacturing and supplying emissions control technology for heavy-duty diesel vehicles over more than four decades, including the bus, lorry, coach, construction, rail and marine sectors. The company has been working with operators and government bodies around the world to retrofit existing fleets to ensure their compliance with clean air legislation.

With its head office and manufacturing facilities in the UK and Shanghai, Eminox has been first to market with regulator-approved retrofit systems for various sectors. Over the past decade, these emissions reduction systems have removed more than 25 000 tonnes per annum of harmful nitrogen oxide emissions from entering the air that we breathe. Using EU ‘cost to society’ figures, this equates to a saving in health service budgets of around £631m.

Eminox has also gained experience with both diesel and hybrid new-build trains across the UK and Europe. For example, since 2014 it has supplied more than 850 emissions control systems for the Hitachi AT300 family of underfloor-engined inter-city trainsets.

To prove the potential for retrofitting existing DMUs cost-effectively, Eminox teamed up with South Western Railway and rolling stock leasing company Porterbrook to equip the centre vehicle of a three-car Class 159 DMU with an EMxS5 exhaust after-treatment system. These units operate on SWR’s route between London Waterloo, Salisbury and Exeter. The project was supported by funding from the Department for Transport through Innovate UK’s First-of-a-Kind Round 2 research initiative.

Like many existing DMUs, the 1990s-built Class 159 is a well-engineered vehicle. The aim of the six month FoaK2 proof of concept trial was to achieve emissions equivalent to the current Stage IIIB rail engine requirements, reducing NOX by more than 70% and particulate matter by over 80% when running at operating temperature (>220°C). Although this target was seen as ambitious, the trial achieved results approaching the future Stage V standard, reducing NOX by more than 80% during regular operation, along with a 90% reduction in hydrocarbons, CO and PM.

One of the major achievements was to deliver a demonstrator vehicle with full certification approvals within nine months. Whilst a proof of concept existed for an automotive emissions package, this had never been assessed for compatibility with rail operations. The partners worked with Ricardo Rail to define the compliance requirements, address them in the design, and undertake the physical testing for fire performance, structural integrity and infrastructure compatibility. 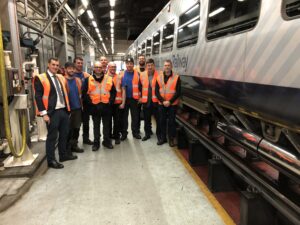 Developed for retrofitting to Class 159 DMUs or the similar and more numerous Class 158, the Eminox EMxS5 EATS is derived from the EMxE6 technology used to retrofit diesel road vehicles, which had been proven to achieve the Euro 6 standard.

The system uses an oxidation catalyst and a wall-flow filter to remove particulate matter, including carcinogenic ultra-fine particles. NOX emissions are then reduced through urea-based selective catalytic reduction, including the primary NO2, which can cause and exacerbate respiratory health issues. The whole package is actively managed by an advanced Electronic Control Unit, calibrated to maximise emissions reductions as the train’s operating conditions change.

Adaptations for a rail application included the development of onboard urea storage, dosing and air systems, the use of ruggedised electronics and fine-tuning the catalyst performance characteristics to meet rail duty cycles with high exhaust temperatures.

To provide the necessary envelope, an innovative approach was taken to re-configuring the existing equipment. 3D scanning was used to map out the available space on the vehicle underframe and model possible options. Taking advantage of battery development since the trains were built, the battery box could be reduced in size by approximately one-third to provide space for the urea tank.

The high exhaust temperatures were overcome by the adoption of advanced catalyst technology. Eminox specialists identified a potential drop off in performance as a result of the natural oxidisation reaction of ammonia at such high temperatures. So the team worked closely with specialist manufacturers to develop a catalyst with additional coatings suitable for the required operating range.

As well as conducting pre-installation lab testing, the six-month trial was monitored remotely using state-of-the-art telematics, so that all the collaborators were able to access real-world, real-time emissions performance data and monitor the health of key features like urea levels and system up-time.

The trial demonstrated an excellent performance beyond the original targets. System calibrations were continuously improved throughout the trial; emissions reduction figures from the latest calibration include an average NOX reduction of 75% overall.

The bench test demonstrated a reduction of more than 80% in NOX, CO and hydrocarbons, with all emissions better than Stage V levels. The total NOX saving for the trial vehicle over the six months was 1 834·87kg, equivalent to the output of 30 Euro 6 double-deck buses for the same period. On an annualised basis, this equate to a projected NOX removal of more than 5 700kg per system or 17 000 kg for a three-car DMU. For a fleet roll out across 43 vehicles, the potential NOX saving would fill 30 Olympic-sized swimming pools!

The EMxS5 technology could also be adapted for different classes. The UK has large numbers of post-privatisation DMUs, built in the late 1990s or early 2000s, which must be attractive candidates for modification.

Calculations by SWR and Porterbrook put the cost of replacing a three-car DMU at around £4·5m, whereas retrofitting an existing unit with EATS to deliver the same improvement in emissions performance would be around £150 000. Improved air quality can be achieved quickly and cost effectively, without imposing significant costs to be passed on to the passengers.

The six month trial clearly proved that exhaust after-treatment technology works in continuous real world operation, with no impact on cost or performance. The same approach is applicable to a wide range of diesel trains, including the freight sector, which still predominantly relies on diesel traction. Retrofitting is a key element in the 2020 Air Quality Strategic Framework published by rail safety and standards body RSSB, which painted a cross-industry vision of ‘a rail network with a minimal impact on local air quality’.

There is an enormous potential market for retrofitting, which would help the rail sector support the UK government in meeting its ambitious net zero 2050 targets. There is scope to improve air quality and reduce emissions at lower cost, by retaining rather than replacing existing diesel trains, helping to bridge the gap to a decarbonised transport sector.

However, successfully reducing rail emissions will require state support to kick-start the investment. Government and local authorities have provided targeted funding to road operators, enabling them to retrofit existing vehicles. The same approach needs to be extended to rail. And this also provides an opportunity for the UK to lead the way as a ‘green pioneer’.